Ouch, my smart phone running on Windows Mobile died! Nevertheless, it was time to get a new gadget! As introduction to the big world of Android smart phones, I got myself an HTC WildFire (running Android 2.1). Time to download the Android Development Kit!

One of the things I missed on my new Android phone, was HSTouch. When writing this article, HSTouch for Android was still in development. It would still be a while before it would be available to the big public. There was however a (beta?) version of something similar: DroidSeer. However, why spend money on such an app, if you can make it yourself. So, let’s get started!

A few hours later, the back-end was more or less ready. Then it was time for the Android devs. A couple hours later, the first proof-of-concept was ready. Well, now I can do the (default) Home Automation things again on my new Android 2.1 device.

Here are some screenshots (running in emulator) – sorry for the Dutch device names. Bit by bit the app will be tweaked and enhanced (for personal use). 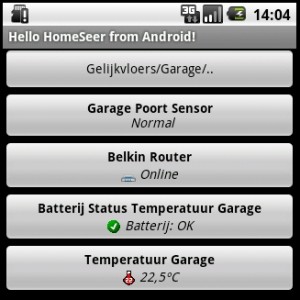 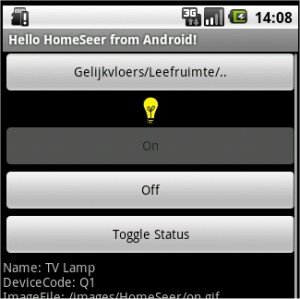